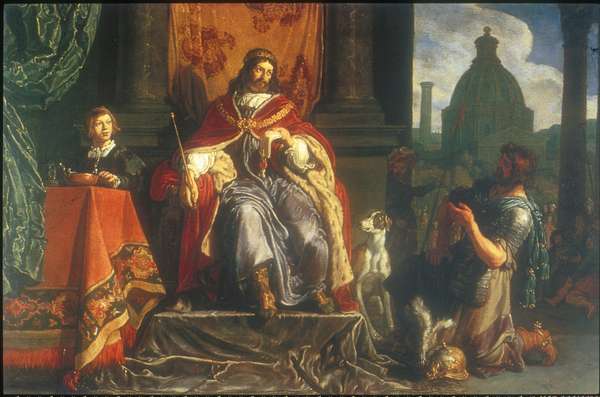 One of the clever parts of the old Kingdoms of Kalamar setting was the Divine Right of Kings mechanic which granted divine bonuses to nobility and royalty in the world passively. So, NPC kings really did have a sort of “divine right” to rule. It wasn’t that a particular God or Goddess chose them, so much as it was that because the world was very VERY friendly to divine magic (four dozen fleshed out deities and variant clerics, which we’re working on updating to 5e now) that the makers wanted to represent how that would influence the building of nations.

So, we’ve done and tested our own update for that system and simplified it. The pre-requisites are guidelines, of course–in one region a Duke may be a slightly different title or amongst one remote town, their “king” might be that in name but properly rank only a 5 on the Divine Right chart.  Flexible is the key.

The idea here, below is that PC’s have something to think about when meeting NPCs. Its one thing to RP naturally that the Duke is a powerful man, but it adds a whole new dimension when one is confronted with that same NPC having some stats and a sort of Divine Favor for their rule. At the least, it should make assassination plots harder and really emphasize why an Assassin Rogue needs all those dice to kill one simple non-PC character.

Keep in mind, again, different titles can exist for the ranks and DM’s are encouraged to bend the curve up or down for their games as they see fit on some of the pre-reqs.

So, as you see, the higher the rank, the most abilities and bonuses are given over to the character. Your average king would be a hard character to deal with (not just combat, but in general) within their palace (Lair). They’d be stacked with extra HP, roll advantage naturally while in the palace, have the convenience of men-and-women-at-arms that will throw themselves before threats to the royal person, they are un-impersonatable, will pass lots of saves, hard to hurt with anything short of magic, and can Stun with a glance.

Hardly unkillable, but it makes any meeting “with the king” one where the PC’s are just going to be on their back foot. And it makes PC’s that decide to “go for it” and try and kill a royal or sovereign NPC have a hard time with it.  The gods, afterall, agreed to respect mortal rulers. Its not enough to “save” the NPC, but enough that they’d survive the first round or two in most situations and leave plenty of time for guards and servants to tackle and pin most threats.

It also gives players something to really look forward to.  It’s one thing to say “you can earn a title” like from the DMG… another to have that mean “you might get something from that”. I’ve found it encourages broad goals and RP. I have, by having things like this in my games, more players try to play outcast nobles, power hungry warlords in training… they want to rule and build and grow and become lords of the land. I like to think some of that motivation is from a Divine Right of Kings sort of mechanic.

It's going to be amazing--300 pages, art, and so much high quality content you'll be drownin' in it...